When I accepted my school position this summer, I was informed that there would be two holidays in the summer that there would be no school.  I wasn’t told what they were…I was just given the dates.  One was Monday, July 4th which I immediately recognized as a holiday.  The other one was Monday, June 20th.  I had no idea what holiday this was, but I knew that we had that day off.

Reading the Cincinnati Enquirer newspaper after church last Sunday (6/12), I came upon an article entitled, “What to know about Juneteenth.”  I began to read the first couple of paragraphs:

“Juneteenth, the oldest known celebration of the end of slavery in the United States, is observed every year on June 19.  Americans will recognize the holiday on a Sunday in 2022.

It is celebrated on June 19 because that is the day the news of the Emancipation Proclamation reached enslaved people in Galveston, Texas, in 1865.

President Joe Biden signed legislation establishing Juneteenth as a federal holiday in 2021.  It is the first new federal holiday established since Martin Luther King Jr.’s birthday was approved in 1983.

On June 19, 1865, Maj. Gen. Gordon Granger and Union soldiers arrived in Galveston, Texas.  With them, they brought news that the American Civil War had ended, and enslaved people were now free.

It took 2 1/2 years for the news to spread to the Lone Star State after President Abraham Lincoln’s Emancipation Proclamation became official on Jan. 1, 1863.  The 13th Amendment, ratified in 1865, freed enslaved people throughout the country.” 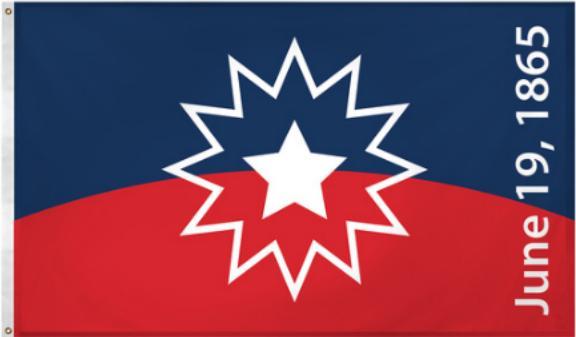 The Senate unanimously approved a bill that would make Juneteenth a legal public holiday. The House passed the bill by a wide margin the next day, with 14 Republicans opposed (Kentucky Representative, Thomas Massie and 13 others voted against it) and President Biden signed the bill into law.

Juneteenth does not represent the end of black chattel slavery in America, as it is often erroneously reported. It specifically notes the end of slavery in Texas.

Carl Mack, a black historian and former President of Seattle King County NAACP, says that “Juneteenth is historically incorrect, and I think this holiday is insulting to us as a people.”  He says that it is incorrect because the bill states that the date of June 19th ended chattel slavery.  There are two things that this bill teaches.

1.  That the slaves in Galveston, Texas were the last slaves that were freed, and

2. That they got the word that the Emancipation Proclamation two years and a half late.

Both things are historically incorrect.

Slavery ended six months after Juneteenth in America.  In the Emancipation Proclamation Lincoln said that the slaves who lived in the rebellion states were freed.  He only mentioned 10 of the 11 states because Tennessee was controlled by the Union at this time.  There were 10 other states that had succeeded and join a new nation—the Confederate States of America.  They had a president—Jefferson Davis, a vice-president, a congress, had made laws, etc.  It was not a civil war; it was two nations fighting each other.

But there were four border states:

Mr. Mack asks a pertinent question.  How could Abraham Lincoln free the slaves of another country?  It wasn’t a Civil War; it was a war between two different nations.  The South had formed a new nation.

In last Friday edition of the Enquirer I found another article on this new holiday that quoted Christ Miller, the senior director of education and community engagement at the National Underground Railroad Freedom Center in Cincinnati.  He is quoted as saying,

“When the Emancipation Proclamation was drafted, we were in a time of war – a war between two countries, not a war within one country.  Often, I don’t think it’s framed in that way.  But that is the most truthful, accurate account of what was taking place.  In an interest twist, while slavery was made illegal in Confederate states by the proclamation, it was still technically legal in the Union.”

Lincoln pronounced the end of slavery in the nation that he was fighting; he didn’t do it in his own nation. And why would it take 2½ years for the news to get to Texas?  The Confederate States of America paid no attention to his declaration.

And how, Mr. Mack asks, could Juneteenth be the end of slavery when there were over 225,000 slaves in Delaware and Kentucky?

Here are some other questions that are not addressed:

There were almost 700 thousand slaves in the United States in 1790, which equated to approximately 18 percent of the total population, or roughly one in every six people. By 1860, the final census taken before the War between the two nations, there were four million slaves in the South, compared with less than 500,000 free African Americans in all the United States.  That means that one in eight black Americans were free in 1860.

Astonishingly, in 1860 there existed at least six Negroes living in Louisiana who owned 65 or more slaves. Among them C. Richards and P. C. Richards who owned 152 of their black brethren as slaves to work their sugarcane plantation. A similarly impressive Louisiana free Negro Antoine Dubuclet owned in excess of 100 dark-skinned black slaves. He was also in the sugar business and boasted an estate estimated to be worth in (1860 dollars) $264,000. To put Dubuclet’s wealth in context, the mean calculation of wealth for Southern white men at the time averaged $3,978.

There were 11 states that seceded from the United States to the form the Confederate States of America.  They were:

This new holiday is celebrated along with the Marxist backed Black Lives Matter organization.   It is on par with Martin Luther King II day—it’s a Communist’s holiday.  I will observe neither one.