This statement is based on my opinion of Scripture: John 15 v 13: “Greater love hath no man than this, that a man lay down his life for his friends.”

My shallow thinking on this verse was broadened this past week. I thought that it meant only for those who jumped into harm’s way for his friends; like taking a bullet meant for another.

This is just to put things into perspective. The European descent nations have turned their back on God’s laws and due to that God’s people have been caged in. The doors and the windows of the asylum have been barred. The heads of the asylum have taken control and confiscated all property of the children of God and even their children.

Case in point: what do we the people own that does not have the brand of the state markings on it? This is due to no love for God, Family or Nation....

What happens when the inmates or patients want out or to start loving God, Family, and nation? Let’s take January 6th as an example.

There were roughly 1-1.5 million people who showed up on January 6th. If we were to take that number and compare it to the population of America (being roughly 325 million plus) that is less than 1%; and that is using the 1-1/2 million figure…

God said that He would save Sodom and Gomorrah if 10 righteous people were found. We know what happened there. But of that 1.5 million that showed up, how many were righteous? How many were right in their mind with God? We saw a lot of signs with bible verses and God save us and such but if these people were asked a question on whether the races should be separated how many would have said yes?

What would they say about the sodomites in the land? Many do not see that as a problem. Hence, love was shown for God and nation -- just not enough.

Imagine if 10% of the population of America would have shown up January 6th.  That is 32.5 million people.  Would God have handed over the nation to us? Obviously, we will never know -- for it did not happen (10% is used here for 10 was required to save Sodom and 10 also means spiritually perfect).

So, what takes place next in the asylum? The asylum heads are punishing the patients--gas prices on the rise, inflation out of control, food shortages predicted, etc.

The patients of the asylum complain. Their complaints are being heard and told something will be done, giving the patients hope and that hope is nothing more than propaganda; case in point, the continuing news that more election fraud has been uncovered and yet nothing has been done.

Even if a case was scheduled to be heard, all it would take is for the opposing attorneys to ask for a continuance and it would be granted. How long will this continue?  All depends on God’s people whether they love deliverance more than delusion. 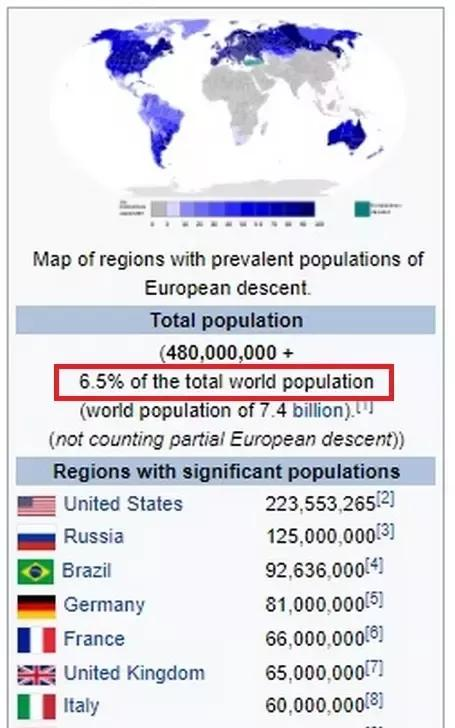 As depicted in this chart  there are supposedly 480 million plus white European descent people in the world and of that number supposedly 220 million in America and of that we do not truly know if that bloodline is pure (this chart is suspect, for the numbers recorded from Brazil and Italy do not add up by other sources).

Of these numbers, what will it take to break away the barriers of the windows and doors of the asylum and to let God's people free or to let the light shine in?

We know at this congregation what is required to be done, but we do not know if a certain number is required. Could it be 10% or could it be 144,000? Only God knows.  Let us be patient until God’s will be done.

I have an aunt who died almost two weeks ago.  I went to her funeral this past Monday. This aunt, of all my other aunts, I did not get to see much. I knew her first husband had died, and she had seven children with the youngest being one year old when her husband died in 1981. I never realized how rough she had it or paid much attention to it.

Someone introduced her shortly after her husband’s death to this man. After six months of knowing each other they got married in 1982.

This man married my aunt with seven children. Not many would take on this sacrifice. He apparently did not care of the financial burden or if his parents were still alive what they thought. Outside influences obviously did not affect him (all speculation on my part).

They would have been married 40 years this November. He was very heartbroken at the funeral, for he lost his love, his friend, for he gave his life to her. This is an example of sacrificing for family. All the brothers and sisters consoled each other and their stepdad along with the grandchildren who were carrying the casket.

Is this a classic example of God putting His laws on the hearts and minds of His people and His people following what God gave them? Will they hear the words,“Well done, good and faithful servant”?

If not, then I pray that God has mercy on them. What good are sacrifices if they are not done with righteousness?  God’s people are deluded into thinking that they will be rewarded for the sacrifices they make to un-Godly people and nations.

For example, men and women signing into military duty fighting unrighteous wars. Fundraisers that are set up for cures that never seem to come about, and various other programs that seem righteous and are not.

Proverbs 21: To do justice and judgment is more acceptable to the LORD than sacrifice.

Proverbs 15:8 The sacrifice of the wicked is an abomination to the LORD: but the prayer of the upright is his delight.

God, Family and Nation. Truly, loving God will also be loving family and nation.  Blessed be God our Father and Jesus the Christ our brother and the Holy Spirit for the understanding.